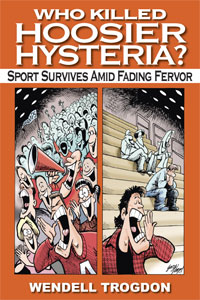 The author relives Indiana basketball's glory years, covers games from the 2003-2004 seasons and reveals Who Killed Hoosier Hysteria? It is a must read for fans. Basketball once was the unchallenged king of Indiana sports, the nearest gymnasium an escape from life's routine. Some of us can still see in the films of our minds, a shot that seemed to stay aloft forever before rippling through the net for a last-second victory. As vivid are the emotions that erupted when tiny township schools upset Goliaths for a sectional championship. The game was as much a part of Indiana as "Hoosiers," the movie, sycamores along the creeks, small towns and general stores, the sweetness of maple syrup and the beauty of autumn leaves. Slowly, regrettably, the echoes faded, taking with them the glory that was once Hoosier Hysteria. Schools consolidated, small towns changed, urban/suburban areas grew, television came, demographics changed, sports teams proliferated and class basketball dulled interest in state tournaments. Check out other titles by Wendell Trogdon
There are no reviews yet, submit yours in the box provided.
Submitting Your Review, Please Wait
Your Review Has Been Submitted Successfully

Add a review for Who Killed Hoosier Hysteria? by Wendell Trogdon