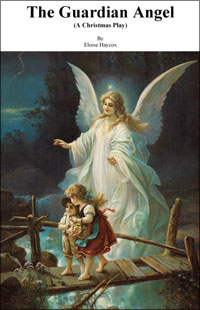 A Christmas Play by Eloise Haycox

This story opens with a strong-willed young man telling his parents he had been offered a job playing piano at a Night Club. His parents beg him to get more involved with church music but he insists that it is his big moment and storms out of the house. Months later he is offered a job playing for a Rock Band but before he switches jobs he decides to swing by his parents house, not to visit but to just "see" that they are OK. However, his parents have moved and the neighbors didn't know where they went.

Then he saw fire at a senior citizens apartment complex and helped rescue a young boy and girl. In doing so, his hands were badly burned and therefore he lost his job playing for the band. While he was recuperating from his burn injuries, he gave piano lessons and his student begged him to come listen to her sing at the Christmas program practice. Through several different circumstances, he ended up playing for the program. Also, the message of the program finally got to his heart and he turned his life over to God.

The pianist is the leading character throughout the whole story, as he struggles against following his own will or turning his life over to God. Even when the rescued boy calls him his Guardian Angel, he says, "Me and God don't have much to do with each other, so I don't think I'd qualify for an angel." Later his piano student says he was sent by God, and the Christmas program director says that God sent him - all these things are what finally brought him to accept Jesus into his heart.

Not only will this play hold the interest of the audience, but it has a message to tell. Depending upon the number of people that can be in this play, the author has put in suggestions for more characters, a place where another skit or a manger scene can be added, several places that songs can be added, an optional shepherds scene that gives an excellent reinforcement of the condition of the heart as someone receives or rejects the guiding of our Heavenly Shepherd. Just before the end of the play, there is a light-hearted children's choir rehearsal to give the audience a break before the serious closing scene.

1 Reviews for The Guardian Angel

Add a review for The Guardian Angel