Oliver and His Unlikely Friend by Jacqueline Lopresti 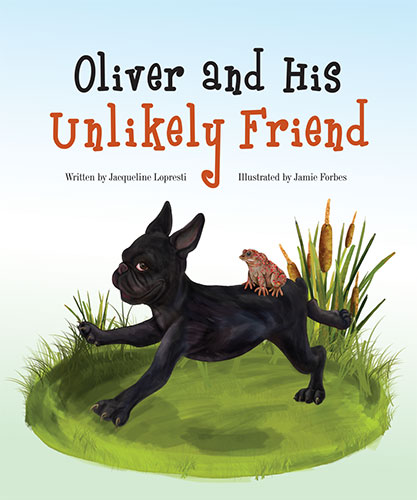 In Oliver and His Unlikely Friend, a curious French Bulldog named Oliver discovers Toby, a garden toad, and they form a bond, seeing past their vast physical differences. When a winter storm hits and Toby needs help, Oliver is there to rescue him despite outside dangers and his own fears. This heartwarming story highlights the value of true friendship regardless of its shape or size.

Jacqueline Lopresti was born and raised in Clifton, NJ. She received her Bachelor of Arts in Communications from William Paterson University. Previously, Jacqueline was a contributing writer for Instigatorzine and Metropolis Nights magazines. She was also a former NFL Cheerleader for the New York Jets, and has appeared in commercials, television shows, and music videos. Her most recent appearance was on the game show $100,000 Pyramid. Currently, Mrs. Lopresti is a dance instructor and choreographer, inspiring her students through her love of the arts. She lives with her husband and the real Oliver in Little Falls, NJ.