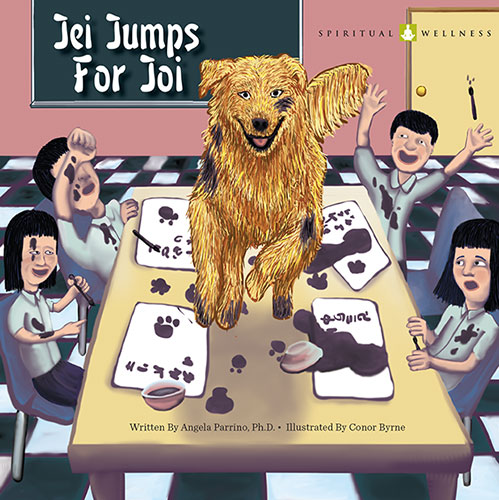 Jei Jumps for Joi is about a dog’s journey to find a purpose larger than himself. Taking place in Japan, Jei, a self-centered golden retriever, plans a big jump that he believes will earn him the affection of the community and steal the limelight from Joi, the town’s beloved Shiba Inu. Although Jei is determined not to let anything get in his way, he awakens on the morning of his planned event to the rumbles of an earthquake that send the town seeking shelter and Joi in dire need of being rescued. Only a gifted jumper like Jei can reach the injured Joi. Jei’s decision to ultimately help Joi and the community brings Jei to higher spiritual ground.

Angela Parrino, Ph. D., was formerly an Associate Professor of the MA in TESOL Program at CUNY-Hunter College where she trained ESL teachers. She’s trilingual and received her BA in Spanish/Education from Stonybrook University and her MA and Ph.D. in Applied Linguistics from NYU.

Dr. Parrino began a second career in healthcare after caring for her father who suffered a stroke. In 2004, she served as surgical secretary/translator for Interplast in Iquitos, Peru and pursued physician assistant studies. Recipient of a Hillman scholarship, she’s currently completing her nursing degree at Phillips Beth Israel School of Nursing. Her interest is in patient advocacy, long term care and end of life issues.

Add a review for Jei Jumps for Joi by Angela Parrino