Damon: Beyond the Glory by Wendell Trogdon 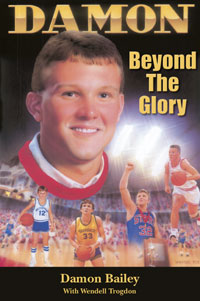 In this sequel to Damon: Living a Dream, Damon reviews his role as an unassuming Hoosier icon and details his transition to life away from the media spotlight. He gives readers thoughtful and intriguing views on incidents and events that have shaped his career.

Damon, a first name that needs no last, lived the dream of basketball greatness at Bedford-North Lawrence High School, Indiana and as a professional player.

In the new millennium he still lives a dream, now as a husband, father, and successful businessman. The roar of the crowd now sounds for others. The limelight has dimmed. Sport writers seldom call for interviews. His legendary hardwood basketball career is now documented in history and stored in the minds of his fans. His thrills come not from 3-point baskets, soaring for dunks or making crisp passes for assists. His contentment comes as a husband, father of three, a successful businessman and a casual fan.

In this sequel to Damon: Living a Dream, he reveals his thoughts about Bob Knight, the game today and life after basketball.

Check out other titles by Wendell Trogdon

Add a review for Damon: Beyond the Glory by Wendell Trogdon