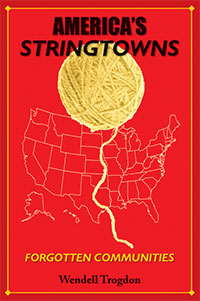 With a few exceptions, the Stringtowns of America are cloaked in obscurity, faint reminders of an early era when communities began as a string of homes along a single highway or a stream. They are fascinations, alike in name, yet as diverse as their locations that are scattered across the nation.

The identification, Stringtown, today may refer to a rural crossroads, a suburb swallowed by a city, a ghost town, a book title or a mere pinpoint on a century-old map. Each is different. Some Stringtowns have libraries, fire departments, police forces, town boards. Others are void of any government officials or post offices. A few can be found on state maps. Some are marked only by a church, cemetery or a long abandoned school. Each left a reminder of the development of the nation.

Check out other titles by Wendell Trogdon

Add a review for America's Stringtowns by Wendell Trogdon